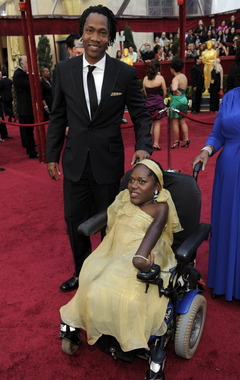 Zimbabwe enjoyed its first taste of Oscar glory on Sunday night when the film ‘#Music by Prudence’ won the Best Short Documentary gong at the 2010 Academy Awards.

“Music by Prudence” documents #Prudence Mabhena‘s life. She’s a 21-year-old from Bulawayo who has arthrogryposis, a congenital disorder that crippled her arms and legs.

Few Oscar films have packed in more profundity per minute than the tale of Prudence and seven other disabled young musicians transcending bigotry and isolation through art and fellowship.

“This is amazing. Two years ago when I flew to Zimbabwe, I never imagined I would wind up here,” said the film’s American producer-director, Roger Williams as he accepted the award. “This is for Prudence.”

In the audience, Prudence beamed from her wheelchair after making the trip to the Awards having earlier expressed doubts because of problems with her visa.

The only blemish on Prudence’s incredible night was producer #Elinor Burkett borrowing a move from #Kanye West’s playbook when she stormed the stage and interrupted Williams’ acceptance. The two collaborated on the movie.

Burkett explained in a post-speech interview with Salon that the pair had a disagreement over the “direction of the film” and that she was late to the podium because Williams’ mother used a cane to keep her from the stage. She went on to say that Williams hadn’t even heard of Zimbabwe until she told him about the country.

Read both sides of the story here

Despite that small hiccup, it was a great achievement and a beautiful story.

Meet Our Host: the Lovely and Talented Tangi Miller