Africa is replete with many amazing tourist destinations which accentuates the wonderful work of nature. Contrary to Africa’s global image of squalor, there are many unbelievable places in Africa which everyone should see once at least. For many Africans in the diaspora and African Americans, these places are nothing like they have ever seen. However, before delving into our list of unbelievable places in Africa you should see, let’s deal with some of the burning questions among potential African tourists.

What are the Safest Countries to Visit in Africa?

Although many countries in Africa are relatively safe to visit, some countries stand out for minimal crime and violence. Little wonder that these countries are usually the most visited by tourists. In no particular order, the countries are Rwanda, Mauritius, Botswana, Namibia, Seychelles, Morocco, Lesotho, Zambia, and Madagascar. Visiting these countries poses little or no danger, security-wise.

ALSO READ: 10 Exciting Places To Visit In Africa After The Pandemic

Where is the Best Place to Visit in Africa?

There are many tourist attractions in Africa, so depending on what you are expecting from your tip, the best place to visit varies. For lovers of wildlife, nations like Zambia, Tanzania, and Kenya are ideal. If you fancy marine life, south-eastern African nations like Tanzania, Mozambique, and Mauritius are your best destinations. Nevertheless, Africa shares something in common. Wherever you go in Africa, you will have a splendid time

What are the Most Visited Cities in Africa?

According to data from the World Atlas, the number of tourists visiting Africa has continued to increase since 2016. The top five most visited cities are Johannesburg, Cape Town, Cairo, Lagos, and Nairobi. Although these data are not for only tourists, these cities are home to some unbelievable places in Africa. That said, let’s get right into it. Here are 10 unbelievable places in Africa which you should see at least once in your lifetime.

Named after the British Queen Victoria, Victoria Falls is simply stunning. The size and power of Victoria Falls are its most striking features. You may have seen Niagara Falls, but it is nothing compared to this fall at the Zambia-Zimbabwe border.

Locals call it “Mosi-oa-Tunya”, which loosely translates to “the smoke that thunders”, in what is a perfect description of this magnificent place. One major activity near Victoria Falls is the Tour of the Falls with a guided walk through the rainforest. Other activities include a dinner cruise along the Zambezi River and a visit to the popular Chobe Park. Visiting this unbelievable place in Africa costs about $30 per day.

ALSO READ: 10 Ways To Find A Travel Buddy For Your Next Trip

The Sahara is not favorable to tourists because of its harsh climatic conditions. Lucky for you, though, there is an entry point to the Dunes from the Edge of Morocco that is friendly. To see the Sahara Dunes, take a camel safari into the Dunes and camp out for the night. There, Sahrawis will entertain you with drumming and singing around the campfire, while you enjoy the panoramic view of the stars. 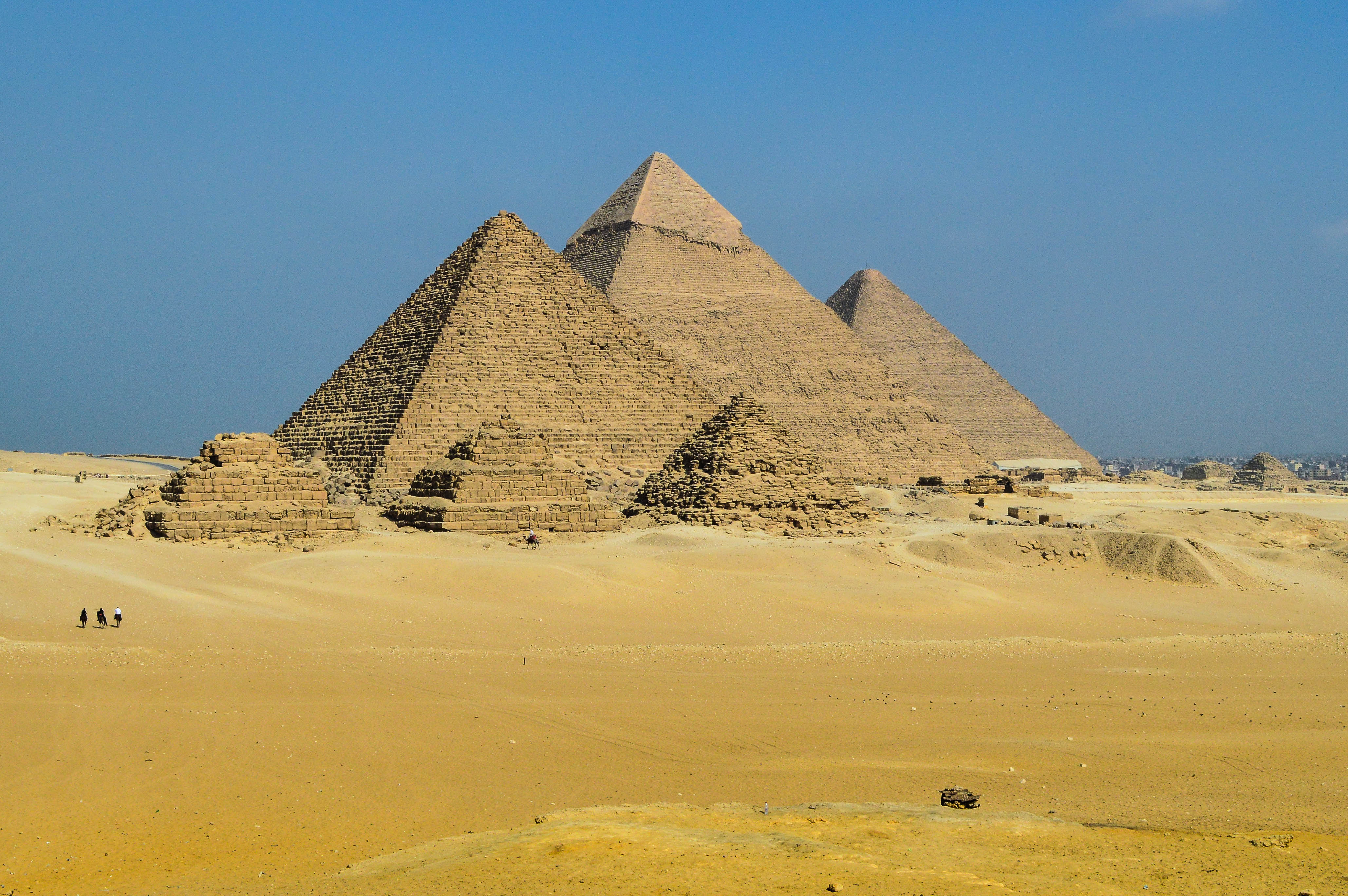 For holiday lovers, this unbelievable place in Africa needs no introduction. The Pyramids of Giza is one of the Seven Wonders of the Ancient World, built between 2700 and 2500 BC. The Pyramids are tombs that hold the mummified bodies of Pharaohs who ruled and died within that period.

Standing several feet tall in their magnificence, Egyptian engineers built these Pyramids with 2.3 million limestones each weighing 2.5 tons. Other activities you could engage in while visiting the Great Pyramids is a camel tour of the Great Sphinx, an equally marvelous masterpiece.

ALSO READ: Want To Travel To Africa? Here Are 10 Travel Agencies To Try

The Table Mountains give you a different view of Cape Town. [Photo Credit: Wikimedia Commons]

Once you arrive in Cape Town, cable car rides are available to take you to Mesa. At the top of the Mesa, you have the best of views, giving your camera unfettered access to the sunrise/sunset. Our challenge for you is that you try limiting yourself to 100 pictures!

The islands are nature’s fine blend of aquatic and forest magnificence. The Magaruque and Santa Carolina coral reefs help to protect rare aquatic species while the forest and grasslands of Benguerra are the habitats of many bird species. The cost of visiting the Archipelago ranges from $130 for a 3-star experience to $900 for a 5-star experience.

Visiting the Fish River Canyon should be on your bucket list. [Photo Credit: Wikimedia Commons]

The Fish River Canyon is the largest in Africa and the second largest in the World, after the Grand Canyon. In terms of travel in Africa, Namibia is the gift that keeps giving, and the Fish River Canyon is one of those. The Canyon is 500 meters (1,640 feet) deep and over 100 meters long. During the dry season, the Canyon is characterized by turquoise pools of seasonally flowing water that stretches into the distance.
ALSO READ: Jessica Nabongo Is The First African Woman To Travel Around The World. Can You Guess Her Favorite Countries?

For people who plan to visit the continent, this unbelievable place in Africa is on top of many’s bucket list. At 5,895 meters high, it is the highest mountain in Africa. Yearly, many tourists embark on a pilgrimage to climb this mount to reach its twin summit. Difficult to climb, the top of Mount Kili offers the rare opportunity to catch a close glimpse as the sun climbs over the clouds. Also, the foot of this Mountain is home to some of Tanzania’s best parks and wildlife reserves. So you could easily combine both experiences.

The Nile is surrounded by many wonderful tourist attractions. [Photo Credit: Ker & Downey]

Taking a cruise along the Nile on a romantic felucca will make you forget your sorrows. Within the Wonders of the Nile are relics of the world’s oldest civilization. The highest point is the Valley of the Kings—with its stunning monumental statues—and the magnificent Kam Ombo Temple. Excluding travel expenses, visiting the Wonders of the Nile costs about $500 for one week.
ALSO READ: 10 Must-See Cultural Villages In South Africa

The Cape Verde Archipelago will redefine your African experience. [Photo Credit: This is Africa]

This unbelievable place in Africa comprises 10 islands off the Cape Verdian coast. Although very expensive to visit, this site blends African, Iberian, and Brazilian cultural influences. From hikes around the volcanic landscapes to water sports to leisure times at the beaches, this archipelago offers it all. If you visit the archipelago in February or March, the Cape Verde carnival in the cultural capital of Sao Vicente is a must-watch.

Lake Retba is a body of water which lies north of the Cap Vert peninsula of Senegal, 30 km north-east of Senegal’s capital, Dakar. It is also called Lac Rose because of its pink color. You shouldn’t get excited at the idea of swimming in this pink lake though, as its pink color is due to the presence of the Dunaliella salina bacteria. The Lake is under consideration by UNESCO as a world heritage site.

The Underwater Waterfall in Mauritius is a lovely sight to behold. [Photo Credit: Pinterest/Earthly Missions]

The Underwater waterfall is one of the landmarks of a country full of masterpieces of nature. Just off the coast of Le Morne in Southwest Mauritius, this waterfall offers a spectacular illusion. Visitors to this unbelievable place in Africa see the sand and debris from the ocean floor running off in a spectacularly. It seems as though the island of Mauritius is being sucked down a huge drain. The scene is similar to one where someone’s pouring down a massive waterfall.

This view is created as a result of underwater currents, and you can only Underwater waterfall by embarking on a helicopter ride. Don’t worry though, rides are arranged specifically for that.

The Danakil Depression is home to many volcanoes. [Photo Credit: Eric Lafforgue/Getty Images]

In the Afar region of Northern Ethiopia lies another of our top unbelievable places in Africa. The Danakil Depression is a vast desert plain which lies 410 ft (125 m) below sea level. It is one of the hottest and most uninhabitable places on Earth, with temperatures averaging 94 degrees Fahrenheit (34.5 Celsius). Temperatures of around 50 Celsius (122 Fahrenheit) have been recorded here.

Finally, these ten unbelievable places in Africa are places you should visit at least once. They offer very stunning and exquisite views of the wonderful works of Mother Nature. If you have visited any of them, please tell us about your experience in the comments section. Also, if you are currently planning a trip to Africa and need a travel buddy, check out our article on how to find one.

9 Must Watch African Movies On Netflix With Female Directors