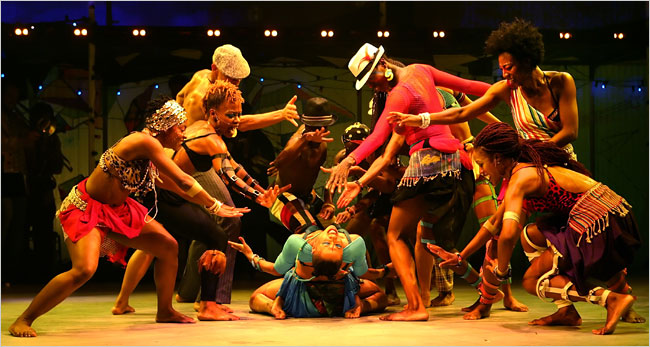 The pulse racing new show of Nigerian Afrobeat legend, #Fela Kuti made a good first impression on broadway. The show was co-written by Jim Lewis and took six years to develop. “Fela!” opened on Sept. 4 for a two-and-a-half-week engagement at 37 Arts, 450 West 37th Street in New York.

The story revolves around the central tragedy of Mr. Kuti’s life, when 1,000 soldiers stormed his compound in Lagos in 1977 and threw his mother, #Funmilayo Ransome Kuti, (played by #Abena Koomsen) a prominent activist, from her window; she later died from her injuries.
The title role of the show is played by Off-Broadway newcomer #Sahr Ngaujah
“The Fela Kuti project dropped from the sky,” said the show’s director and Tony award winning choreographer #Bill T. Jones to the New York Times. “I didn’t know I was looking for such a thing, but it’s rooted in the big questions of my life, questions like creativity, transgression, rebellion, sensuality, history, race, power. And there’s something about the man that calls out for a very poetic treatment. His life is so mythic in its scale.”
Facebook Comments
Related Topics:Abena KoomsenBill T. JonesFela KutiFunmilayo Ransome KutiSahr Ngaujah
Up Next