Africa is a continent with numerous tourist attractions. However, what makes many tourists come back after their first visit is the mouthwatering African foods. One bite usually sets off an unquenchable taste for spicy food. Every year millions of tourists visit various African countries to enjoy the fantastic climate and great food. African is blessed with diverse cuisines and you’ll be spoilt for choice. Every region in Africa has a unique cuisine that they are known for. African food is popular due to the heavy use of local spices, vegetables, fruits, and grains. Without much ado, below are 13 of the most popular African foods.

Every region in Africa has a spicy delicacy that will leave you gasping for air. While chilies and hot pepper are the most common hot spices, there are other local favorites. They include ginger, cumin, cinnamon, coriander seeds, curry, garlic, and sesame seeds. Therefore, make sure you know your allergies and ask properly for the ingredients. It is always good to eat only what your body can tolerate.

ALSO READ: 15 Delicious African Recipes You Should Try This Easter

What is the most eaten food in Africa?

Different countries in Africa all have famous cuisine. For example, if you go to West Africa, you’ll find that the most eaten food is Jollof rice. However, in Kenya, you’ll discover nyama and irio as the most consumed food and so forth. But, if you are asking about the type of food that is consumed the most, your answer is cereal.

What is the role of food in African culture?

African foods play a vital role in connecting people from various regions. In fact, food has become the identity of certain tribes. Therefore, many African people use food as a way of preserving their cultural identity. It is not surprising that African mothers hand the art of cooking to their daughters. Inasmuch as the tradition is fading, women remain the chief custodian of food culture in most communities. Others have carried this culture with them to different parts of the world.

13 of the Most Popular African Foods 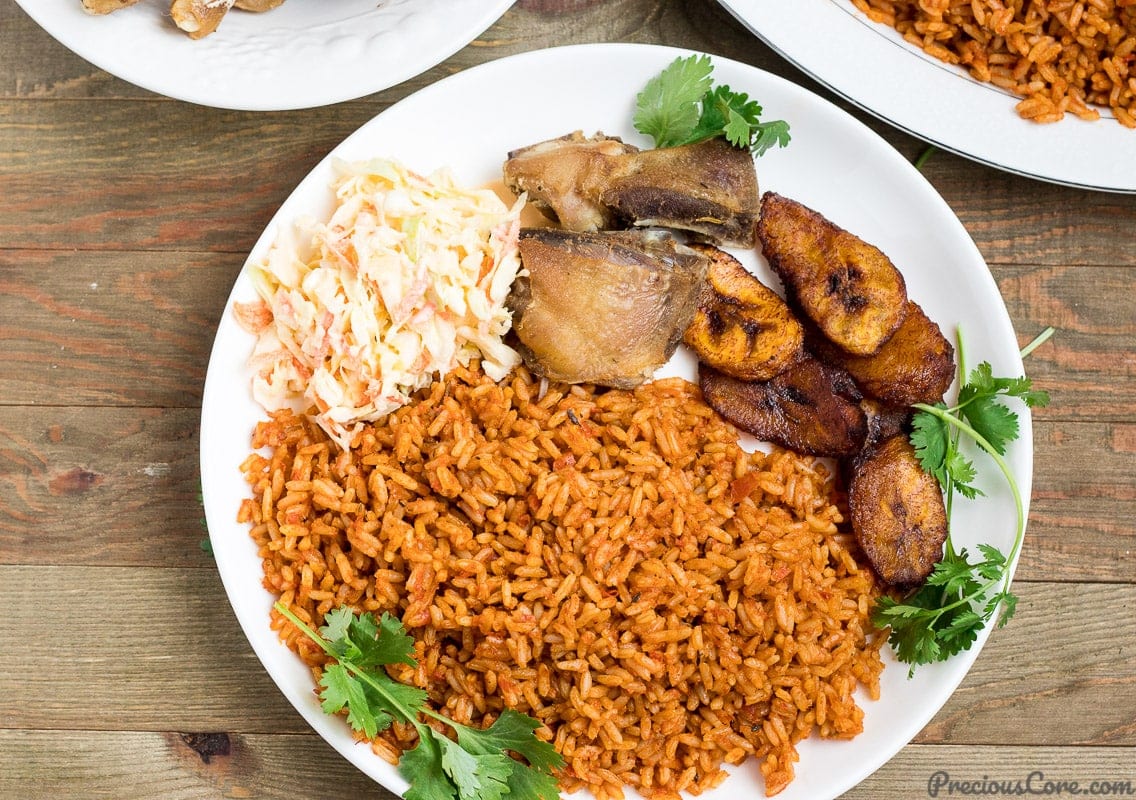 The first on our list is Jollof rice from West Africa. Once you visit Nigeria, you shouldn’t leave the country without having a taste of this delicious meal. This is one of Africa’s delicacies that now enjoys patronage from all over the world. Jollof is rice prepared in a pot with tomato sauce and served with either fish or meat (chicken or beef). Today, Jollof rice has become the signature dish at festive gatherings and parties. In some cases, you will get Jollof rice with egusi soup. There is still a tug of war between Nigeria and Ghana on who makes the tastier Jollof rice. 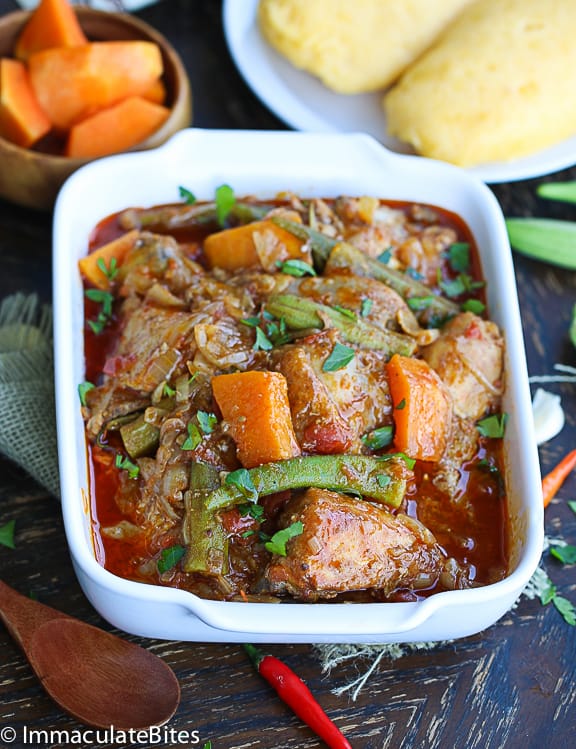 There is a popular saying that, “When you go to Rome, behave like Romans”. Likewise, when you visit Luanda, do like Angolans. In this case, you will have to taste chicken Muamba, one of Angola’s unique cuisines. You cook chicken Muamba using spices, palm oil, garlic, okra, and chillis. It is often accompanied with fufu, igali, or fungi.

ALSO READ: 15 Recipes That Will Have Your Kids Fall In Love With African Cuisine

Ask ten Kenyans about their favorite food. Chances are they will say Nyama na irio. Nyama na Irio is a typical Kikuyu staple food. The dish has spread throughout the country, and become a favorite for many Kenyans. Irio is a combination of mashed up potatoes, beans, peas, onion, corn. It is served with “Nyama”, which is roasted meat marinated in spices. You will find this kind of food at weddings or traditional celebrations. Are you planning to explore the land of pharaohs and pyramids? After all the touring, reward your taste buds with Koshari, one of the country’s food treasures. The food is more of a staple for Egyptian families. It comprises rice, lentils, chickpeas, garlic, macaroni, spicy tomato sauce, and fried onions. For a recipe as popular as Koshari, expect to encounter some variations. 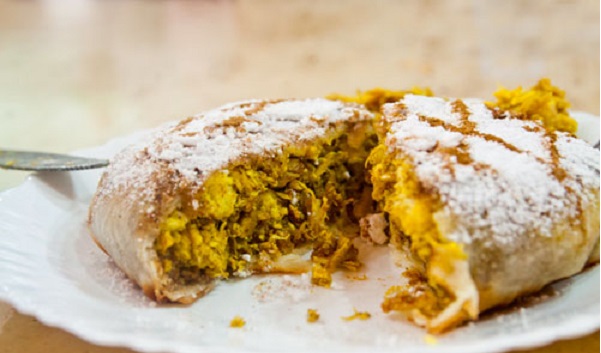 Moroccan dishes have earned themselves global recognition over the decades. However, Moroccan tagine Pastilla is not your ordinary dish. You will not find it in regular cookbooks. Pastilla is a pie that consists of shredded chicken covered in thick egg sauce and natural spices. Hardly will you find a major celebration in Morocco that doesn’t serve this meal. The absence of it makes the party incomplete. 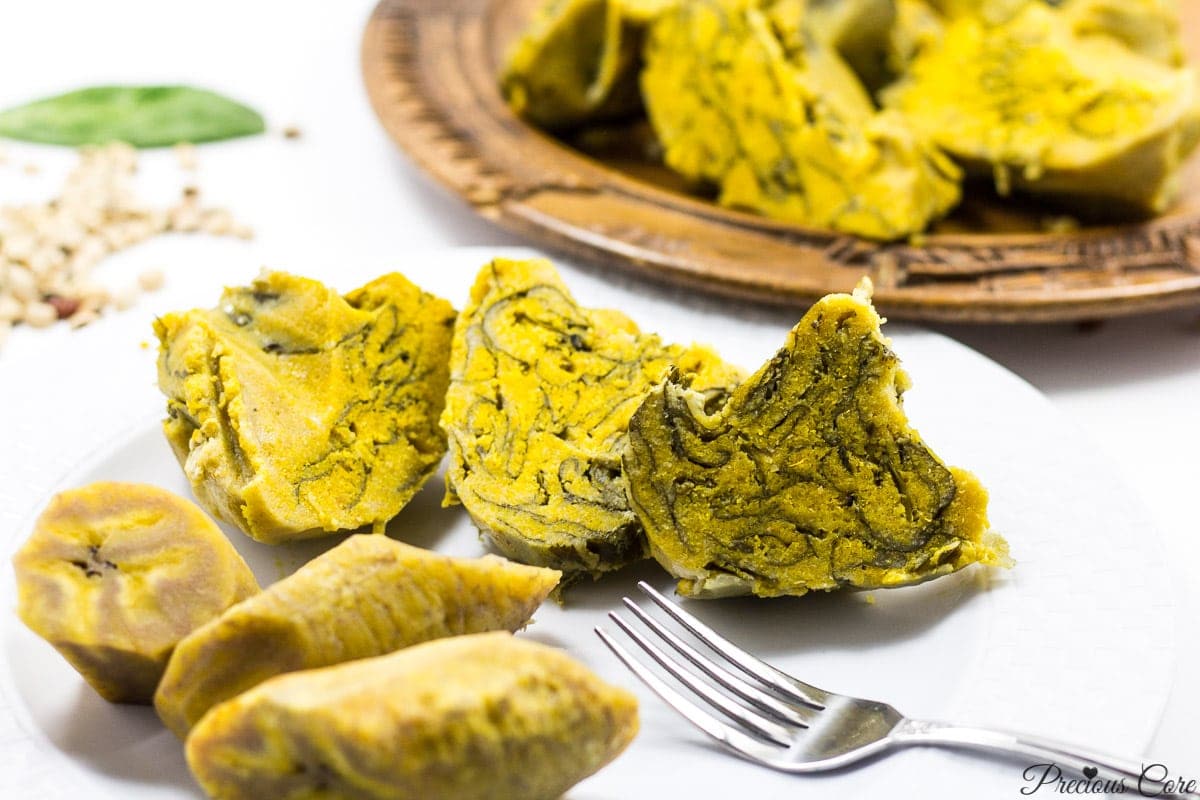 Koki, also known as bean cake, is a delightful appetizer found in Central Africa, Cameroon. This is a must-have dish if you happen to visit this region. The main component is cowpeas. The peas are boiled and mashed, then wrapped in banana leaves and later steamed. Koki gets its bright red color from red palm oil, chili, and palm nut sauce. If you have had a taste before, share your experience in the comment box below.

Couscous is a popular African food enjoyed in the North African region. The dish consists of steamed semolina. Ask for couscous Royale with sliced lamb infusion if you want your mouth to explode with sweetness. Also, you can ask for other accompaniments such as Saffron and spiced chicken. This combo will give you an unforgettable dining experience. 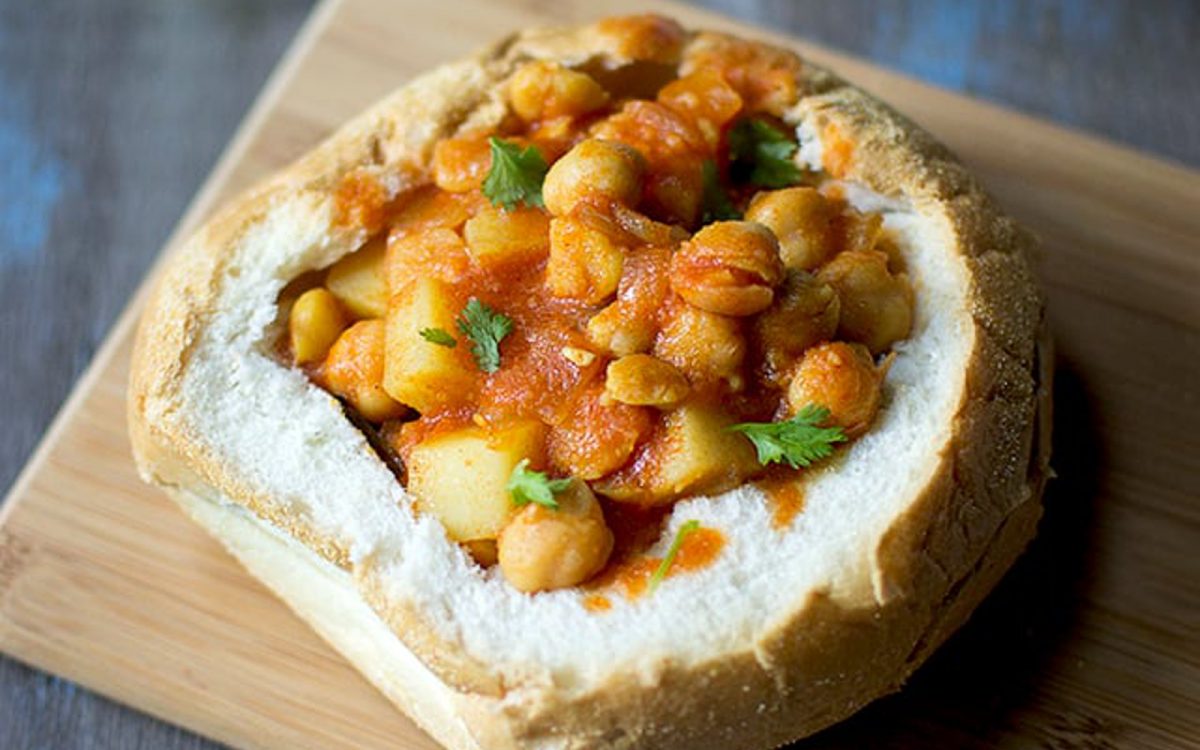 We still don’t know how South Africa’s most famous African food got its name. However, what is certain is that Bunny Chow is one of the countries most sacred street foods. Bunny chow is a hollowed-out quarter loaf filled with meat and vegetable curries. The meat and vegetable curries were brought in in the 19th century by Indians. Besides, you can get to enjoy these delicious street foods in all major cities across the countries. 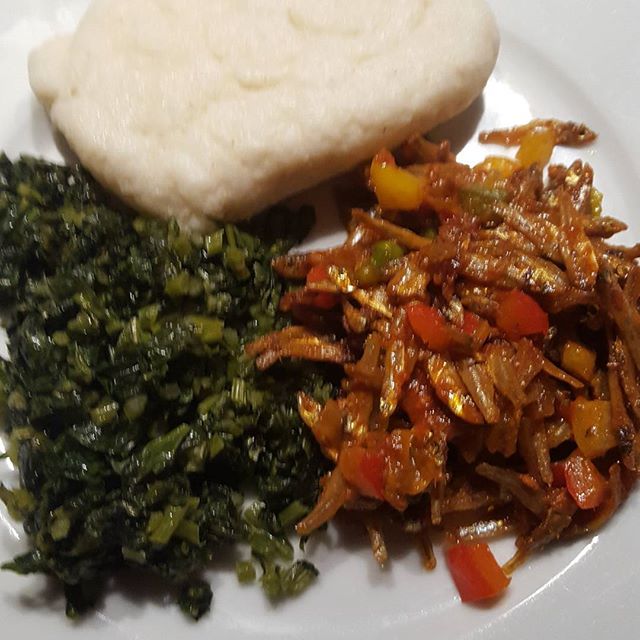 One of Zimbabwe’s culinary highlights is crisp-fried kapenta with Sadza. Kapenta comprises two species of freshwater fish from Lake Tanganyika. Like many African foods, Kapenta comes side-by-side with a bowl of delicious maize porridge known as Sadza. You can get Kapenta either in fresh or dried form. Additionally, you can stew it with onions, tomatoes, and groundnut powder. It’s served with fresh greens. The traditional way to eat kapenta is to take Sadza and roll it on the fish using your hands. One of Tanzania’s popular dishes is the pilau. This African cuisine draws its influence from the Indian rice dish. However,  the use of various spices during preparation is what makes the dish special. The pilau rice is cooked using spices such as cloves, cinnamon, pepper, cardamom, garlic, and ginger. Also, you can add fish, meat, eggs, or chicken to the dish. The meal is almost exclusive for special ceremonies or celebrations. 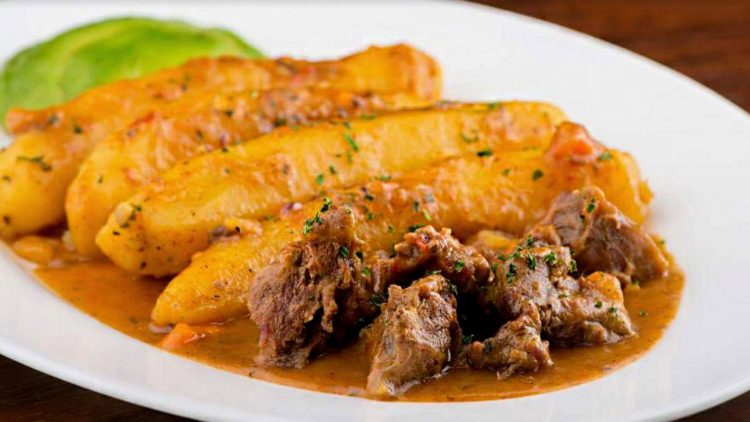 Uganda is a great tourist destination for wildlife enthusiasts. This is due to the epic natural destinations, beautiful restaurants, and the delicious Uganda cuisine matoke. A visit to Uganda isn’t complete without a bite of this delicacy. Matoke is made from mashing cooked green and unripe bananas. It’s served with peanuts, meat stew, or vegetables. Interestingly, this doesn’t come as a surprise considering the fact that Uganda is one of the top suppliers of bananas to European markets. 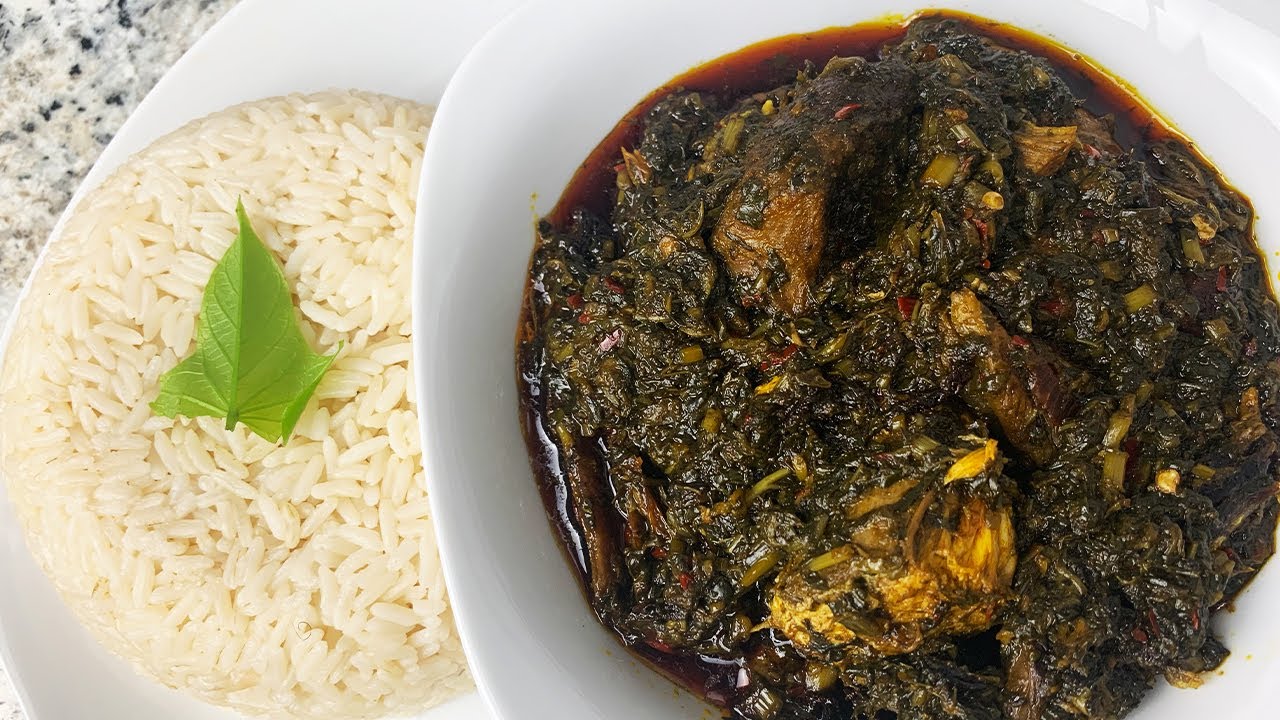 When Liberians are not eating Jollof rice, they are churning it down with cassava leaves. Cassava leaf and rice is a popular food in Liberia. To prepare the meal you boil rice separately. Then, pick cassava leaves, clean the leaves, cook, and pound them with fish, meat, water, or coconut milk. The end product is rich and oddly inviting. Share your thoughts on this meal in the comment box below.

This Ethiopian cuisine is delicious and full of surprises. It is ideal for vegetarians, gluten, and vegans. One of the famous African foods in Ethiopia is the sour flat dough known as Injera. The bread comes in two versions, darker and lighter versions, depending on the ingredients. Vegetable sauces, meat, and beans are poured on top of the sour bread. Arguably, it is one of the richest African foods you will taste on the continent.

Africa has 54 countries, and all of them have various popular African foods. While we can’t exhaust all of them, the above are some of the most common African foods in different regions. So, whether you are heading to the north, south, east, or west, you have something to savor. Check through our recipe page for cooking directions for some of the foods. Hopefully, you will be able to cook them from the comfort of your home. Have you tried any of these foods? Tell us in the comment section below.

These 13 African Celebrities Will Inspire You To Work Out